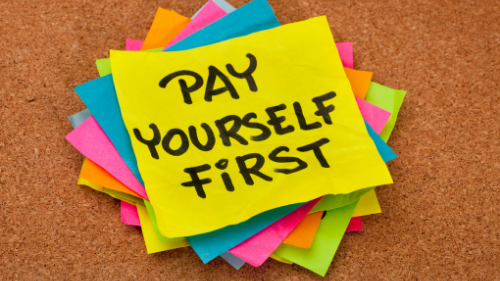 There is a rule of thumb that says you should pay yourself 5% to 10% of your income before you start spending it. Many people will argue that they don’t make enough money to cover even their basic necessities and pay their bills, so where will they find extra money to pay themselves 5% — never mind 10%?

Here’s a question I have for you if you’re a regular employee: When you get your paycheck at the end of each pay cycle, do you get paid first or does the government get paid first?

I don’t know about you but my government has never asked me if what’s leftover on my paystub after income tax, Canada Pension, and Employment Insurance are deducted is enough to take care of myself and my family. I have to make do with what is leftover.

In earlier years when I felt like my leftover income wouldn’t be enough, especially in the future, when my children would be attending university and tuition would become a great expense, like the government, I too decided to start paying myself first to have something growing for their future. Later when it became apparent that the proceeds from paying myself first would not be sufficient with the rising cost of tuition and living expenses, I started to expand my means by using the accumulated funds from paying myself first, and other people’s money (OPM) to increase my financial situation.

In fact, I use the same “Pay Yourself First” strategy to repay other people’s money while building my wealth. I repay some OPM first before I start spending the rest of my income. This is like reverse saving.

I know that you may think that paying back other people’s money is not the same as “Pay Yourself First” but I will explain here why they are indeed the same.

When you use OPM to build wealth, you’re on the hook for the money borrowed until you repay it. So you’re in debt and debt attracts interest. Each time you pay back some OPM, it’s considered putting money in your own pocket because you’re no longer on the hook for the amount you repay, and on top of that, you’re saving yourself some interest charge. The interest that would have gone to the other person is now yours to keep, and assuming your investment is growing, the interest earnings on the OPM will continue to be yours for the keeping. By the time all the OPM is paid off, all that money is now yours and whatever interest was earned on it for the duration of the time it was borrowed.

Next, I will share 5 reasons why the “Pay Yourself First” strategy improves your Finances.

#1 – You Can Create an Emergency Fund

Having an emergency fund is a great way to cover unexpected expenses and weather life storms when they appear. You will likely have at least 5 unwanted surprises that will impact your finances throughout your lifetime. So it’s not a matter of whether these surprises will come, it’s a matter of when will they come. If you subscribe to having an emergency fund in place for unexpected expenses, you will not be easily rattled when they come up.

#2 – You will have a Nest Egg for the future

Like spending, saving can become a habit, and it’s a great habit to possess especially when you set saving goals. If you practice paying yourself first from an early age, this will give your savings a longer time to grow.

Regular savings and the compound interest effect will cause small gains to grow exponentially into big gains in the future. Some employers also match savings in retirement plans like 401Ks and RRSPs so having automatic withdrawal each month can be a double win for you. And the earlier you start saving, the more money you will have in the future. When you see the growth you receive from your small efforts, the more likely you will be inclined to employ greater efforts to achieve bigger financial goals for future use.

#3 – You will Avoid Getting into Debt

Practicing paying yourself first will automatically create funds for emergencies so when surprises come up you can cover the cost without getting into debt.

#4 – You will overcome the Scarcity Mentality

Many people operate with a scarcity mentality because they feel like there’s not enough for everyone. For this reason, sometimes they don’t even aspire to have more money. They believe only certain people can live in abundance.

However, when you practice paying yourself first and you see your savings grow and grow, it becomes a powerful motivator to changing your mindset about money. The mental benefit is that once you start seeing more and realize that you can have more, chances are you will commit to saving even more so you can see more growth.

While money can not buy happiness, it can certainly provide peace of mind. A man with savings can walk tall. He doesn’t go through life worrying about his next move if he loses his job for instance. He doesn’t have to take the next job even though he doesn’t like it just because he’s worried that he doesn’t have money to put food on the table tomorrow.

Another rule of thumb for personal finance is to have 3 to 6 months of your income saved up so that when unexpected expenses come up you’re not phased and you don’t have to go into debt. Paying yourself first will allow you to eventually accumulate beyond 6 months of income to insure you against emergencies. Knowing that you are insured against these scenarios will indeed give you peace of mind.

Although paying yourself first is considered one of the golden rules for personal finance, it is important that you review your financial situation before taking action. Many people have debt with interest rates north of 10% so an integrated approach may be needed for their plan.

It’s unwise to pay yourself first in a savings account that pays 5% when your debt attracts interest of twice that or more. It’s better to focus on paying off your debts at higher interest rates first before investing at lower rates because this could potentially save you a lot of money over time.